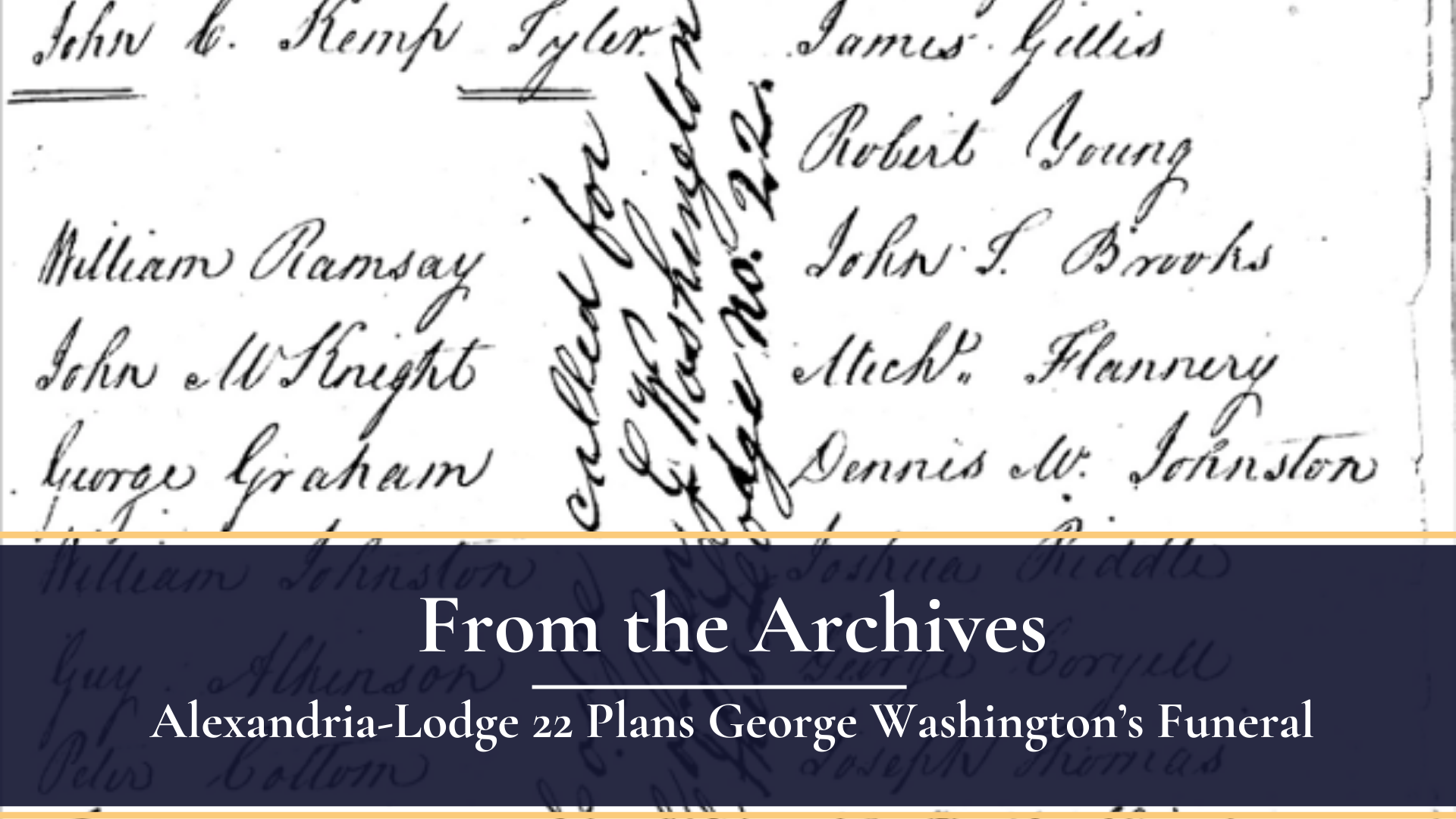 From the Archives is a recurring series that highlights Alexandria-Washington’s archives and museum. Visitors are welcome to visit the museum during the memorial’s operating hours.

December 16 marks the 223rd anniversary of Alexandria Lodge’s meeting to announce the death of George Washington and plan for his funeral service. The lodge’s museum and archives is fortunate enough to have the original meeting minutes from the occasion.

Dr. Elisha Dick, the lodge’s Master, called for an Emergency meeting “for the purpose of taking into consideration and adopting certain measures relative to the burial of our late worthy Brother General George Washington.” Thirty-eight members of the lodge attended the meeting along with two visitors – Charles Lesebre of Fredericksburg Lodge 4 of Virginia, Washington’s mother lodge, and James Bacon of Philadelphia Lodge 7, Pennsylvania. In fact, the meeting became so noteworthy that the lodge’s secretary David Wilson Scott, embedded a note directly onto the center of the page for future reference: “Funeral Lodge called for the burial of Gen. G. Washington, 1st Master of this lodge No. 22. 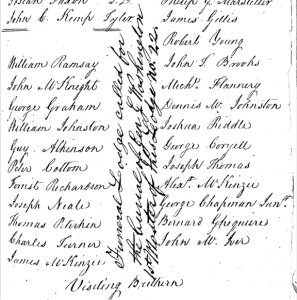 Dick opened the meeting and “delivered a suitable address to the brethren on the occasion.” They then proceeded to discuss funeral arrangements with Alexandria Brooke Lodge 47, the other Masonic lodge that met in Alexandria at the time.

“No. 47 being convened on the occasion a committee  consisting of Bros Peterkin and Neale were appointed  to wait on them and inform them that No 22 were ready to receive their committee and jointly with them to adopt such measures as might appear most proper for carrying into effect the purposes for which our lodges were convened – a committee from lodge no 47 consisting of bro’s Jones and Bouge came in and agreed with lodge no 22 upon the manner in which the funeral should be conducted and then withdrew.”

Dick then ordered that Peter Colton “wait on the Federal City Lodge and invite them to join in the funeral procession on Wednesday at Mount Vernon  at 12 O’clock if fair or on Thursday at the same hour and that the lodge pay him his expenses for going to and returning from the city.” The lodge referenced here is Federal Lodge 1 of the District of Columbia, then originally chartered as Federal Lodge 15 of Maryland, which participated in the US Capitol cornerstone ceremony together with Alexandria-Lodge and George Washington in September 1793.

The minutes conclude with orders that the deacons prepare the lodge’s equipment and “furnish spermaceti candles” for the funeral ceremony. Alexander McCormick, Federal Lodge’s Master, held one of the candles during the ceremony and kept it as his personal memento. The candle is now on display in the GWMNM’s Washington museum. The Secretary was also ordered to “take the case in which the [lodge’s] charter is deposited and have it repaired and new guilted in time for the procession the expense of which the lodge will pay.” The lodge concluded their business that night around 9 o’clock and gathered two days later at Mount Vernon to perform their solemn duty in Masonic tradition.

The record of the December 16th meeting provides valuable insights into the preparations made by Alexandria-Washington Lodge and other local lodges to prepare for Washington’s funeral. Due to the nature of their business, the meeting became one of most well attended and brethren seemed eager to lend their support or assistance in planning. This not only speaks to Washington’s legacy as a public figure but as a trusty and loyal brother.