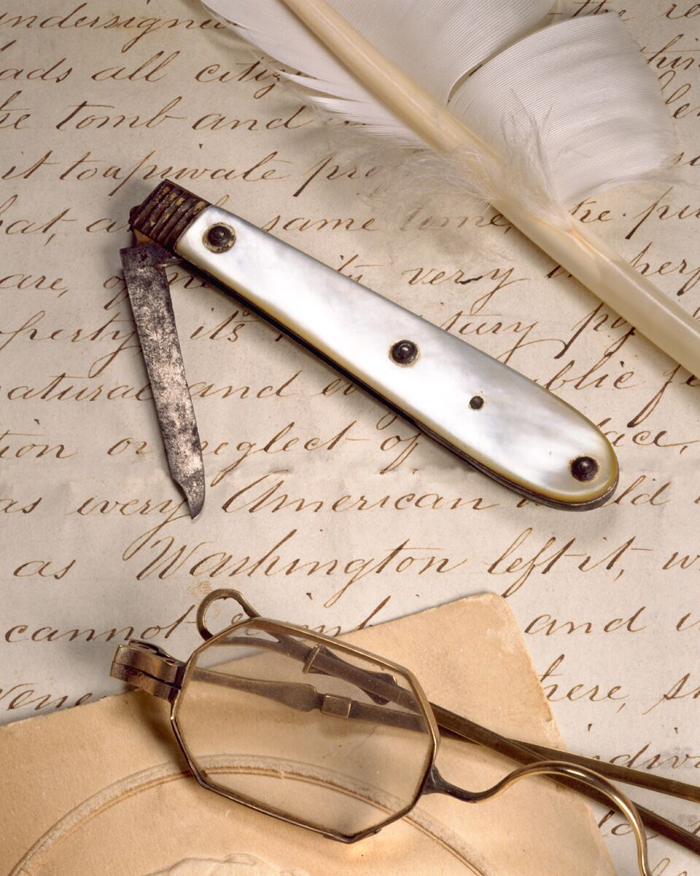 Photography by Arthur W. Pierson
Whether the story of George Washington’s penknife is true or not is for the individual to decide. It certainly is not impossible.By Mike Haskew

During the winter of 1777-78, the cause of American independence was hanging by a thread. The upstart Continental Army commanded by General George Washington teetered on the brink of collapse along the banks of the Schuylkill River at Valley Forge in southeastern Pennsylvania.

Freezing temperatures and malnutrition threatened to finish off the citizen soldiers whose most recent battlefield memories were of stinging defeats at the hands of the British at nearby Brandywine and Germantown. While the British settled into comfortable winter quarters in Philadelphia and his own men suffered from want of the basic necessities, Washington contemplated his future and with it the destiny of the United States of America.

While fact and fiction have blended with legend and folklore to weave the tapestry of American history, one lesser-known tale combining each of these elements brings the knife to prominence once again.

On display at Alexandria–Washington Masonic Lodge No. 22 in Alexandria, Virginia, is a simple penknife. Its closed length is 3 inches; its handle appears to be mother-of-pearl. The single blade is 1 3/4 inches long. The claim to fame of this otherwise nondescript cutlery antique is that it was in the possession of George Washington for 56 years. More significant than the knife itself, however, is the story it inspired, a fascinating tale of devotion to duty and strength of character.

Following the death of his father in 1743, a young Washington, then only 11, went to live with his half-brother, Lawrence. While repairs were being done to the family estate at Mount Vernon, George stayed for a time at Belvoir, the home of William Fairfax, a close friend of the Washington family and also Lawrence’s father-in-law.

“William Fairfax became very fond of George and gave the young man access to his elaborate library,” explains Dr. Claude H. Harris Jr., 32 , K.C.C.H., Archivist of Alexandria–Washington Masonic Lodge, which is located in The George Washington Masonic Memorial. “Through the influence of his brother and the Fairfax family, George obtained a commission as a midshipman in the English Navy.”

According to Bro. John P. (Jack) Riddell, Curator of the Alexandria– Washington Replica Lodge Room of The George Washington Masonic Memorial, Martha Ball Washington, George’s mother, corresponded with her brother, John Ball, who lived in England. “John Ball said that the British navy was a floating hell,” comments Riddell. “So Washington’s mother was convinced not to let George go.” Though the details had been worked out and all preparations made, young George respected his mother’s wishes, surrendered his commission, and returned to the study of mathematics and surveying.

George’s mother ordered supplies from England annually, and in her next order was a request for one good penknife, which she intended to give to her son as a token of appreciation. “This she presented to young George as a reward for his submission to her will with the injunction `always obey your superiors,'” remarks Harris. “He carried the token with him throughout life as a reminder of his mother’s command.”

Later, during the Revolutionary War, Washington supposedly recounted the knife’s history in a conversation with one of his most trusted subordinates, Masonic Brother and Major General Henry Knox. It was Knox who would later play a key role in Washington’s military future. As the Commander-in-Chief quietly deliberated over the situation that bleak winter at Valley Forge, it could scarcely have been more critical. His soldiers were fighting for their very lives against the mightiest military power in the world. If they failed, then along with them would perish an ideal.

“When a timid Congress failed to provide food for his starving and ragged army, in desperation yielding temporarily to his feelings, and in sympathy for his men and disgust with Congress, Washington wrote his resignation as Commander-in-Chief of the Continental Army and summoned his staff to notify them of his actions,” remarks Harris.

“Among the officers present and sitting in the council was Knox, who reminded him of the knife and his mother’s injunction `Always obey your superiors.’ You were commanded to lead this army and no one has ordered you to cease leading it,” Knox said.

Washington paused and said, “There is something to that. I will think it over.” Half an hour later, he had torn up his resignation, determined to fight to the end. Thus, a penknife may have meant the difference between life and death for the fledgling nation. As history tells us, Washington remained at the head of the Continental Army, ultimately leading it to victory with the help of military aid from France. He eventually served two terms as the first President and died peacefully in his bed at Mount Vernon at age 67 on December 14, 1799.

Even those close to the penknife agree that parts of the story may be embellished. But there is no doubt the knife belonged to Washington. It was presented to Alexandria– Washington Lodge No. 22, where Washington served as the first Worshipful Master, by his nephew, Captain George Steptoe Washington, in 1812. The nephew was also an executor of Washington’s will.

Whether events actually transpired as recorded is as much a matter of opinion as appraisal of fact, but indeed the story of the knife should rank in American folklore with that of the cherry tree and the famous phrase, “I cannot tell a lie.”

The knife Washington carried at Valley Forge is only one of many treasured items on display at The George Washington Masonic Memorial. Among others are his bedchamber clock, which was purposely stopped at the moment he died, 10:20 p.m. During that period it was customary to stop the clock and put a plate on the bottom of it to indicate the circumstances of the person’s life. Washington’s clock has such a plate attched. Also at the Memorial are the silver trowel used by Washington when he laid the first cornerstone of the U.S. Capitol, the general’s field compass, boot straps, wedding gloves, and the mourning gloves he wore at his mother’s funeral. The knife itself shares a display case with a pruning knife Washington used at Mount Vernon.

Whether the story of the knife is true or not is for the individual to decide. It certainly is not impossible. Great men and great events inspire great stories, and without question both Washington and the knife deserve their places in history.

This article is reprinted with permission from The Blade Magazine, Krause Publications,