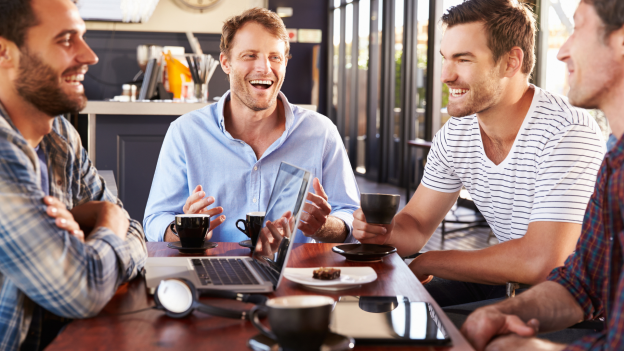 I watched HBO’s, The Wire, for the first time in 2018. What I loved about the show was its ability to depict the realism of our society. What made the show special was its ability to accurately depict the experiences of the forgotten in our society and demonstrate how their lives affect the larger society. I remember thinking that it was remarkable how the show tied the drug dealer’s experience on the corner to the politician having to decide between tough policy choices at city hall.

I finished the show again a few weeks ago and came away from this viewing with an even greater appreciation of the show because I was able to understand that it was really about how individuals are confined to the institutions they belong to. Each season highlights dysfunctional institutions-the drug trade in season one, the dying stevedores union in season two, the Baltimore political machine in season three, the public school system in season four and the local newspaper in season five. Each institution is uniquely different, but all fall prey to similar problems-individual egos, societal pressures, changing environments, corruption, and most importantly systematic limitations. I think the most important lesson of the show is that just because an institution is set up to serve a specific purpose, it might fall short if not watched carefully. It got me thinking about an institution that I belong to: Freemasonry.

Masonry has been an American institution before America became America. It has hierarchies, norms, goals, and principles just like any other institution. It also has its problems, such as: dwindling membership, poor retention, political infighting, poorly managed programs, etc. How do we become less dysfunctional and more effective at accomplishing our goal of making good men better? In the following paragraphs I lay out several systematic changes that I believe could improve our performance.

How do you become a Master Mason? By being a Fellowcraft first.

Master Masons don’t become Master Masons by simply going through a Master Masons degree. There is a process of educating, coaching, question answering, motivating, supporting, and showing up that is required by another individual to move a brother through the degrees. If our job is to make masons, isn’t mentoring how we do it?

At the finality of the Master Mason degree, each brother is given the Presentation Volume-a book that lays out Virginia Freemasonry’s history, degree work, ceremonies, and mentoring. Before looking at the graph below, rank those categories in ascending order based on how many pages you think the book dedicates to each section. 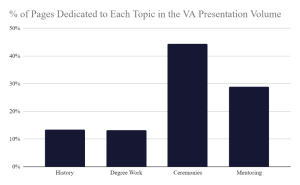 Mentoring is the second largest category at almost thirty percent. Obviously, the craft thinks that mentoring is important enough to dedicate almost a third of its seminal text to mentoring new members. But outside of pages in a text, what is the craft systematically doing to foster good mentorship? I would venture to guess that we are not dedicating anywhere near thirty percent of our efforts to bettering our mentoring abilities.

We have lodges dedicated to our history. Schools on degree work and ceremonies. I propose we have at least one statewide mentoring summit every year, similar to what college fraternities are increasingly doing. The summit should focus on three areas: mentoring new masons, mentoring as a lodge officer, and mentoring as a past master. Each of these areas would have unique methods, techniques, and programs but would all concretely contribute to mentoring good men and making them better. I also believe that it would be a wonderful selling point for potential members because it would be a tangible event that would signal that the craft places an emphasis on mentoring and development while also equipping experienced masons with a wonderful leadership skill.

“Leadership is the capacity to translate vision into reality”-Warren Bennis

The District Deputy Grand Master (DDGM) role is designed to be an impactful part of our organization. He is responsible for communicating the Grand Master’s message and theme to each masonic district. A regular mason may be lucky to see the Grand Master once or twice a year. A District Deputy, however, is able to interface more frequently with local masons throughout the year because of his proximity to the membership. Unfortunately, I believe that due to the fact that their terms are limited to one year, DDGMs are largely symbolic in nature and have little systemic impact on local lodges and districts.

This would have four benefits. One, it gives each potential DDGM important training and forces them to focus on two of our most important focus areas. It would create a consistency of purpose among all DDGMs by forcing each to incorporate  education and membership into their goals as DDGM. Two, it would enable the brother who occupies the office of Grand Senior Warden and then Deputy Grand Master to evaluate how effective their subordinate would be as a DDGM. Is their potential pick doing a good job? Is he conducting good programs and making an impact on his local lodges? If not, the Grand Officer has time to make a change. Three, it removes the assumption that the DDGM office is a ceremonial one. To get the esteemed job of DDGM,  a potential brother would have to roll up his sleeves and earn it by conducting programs and adding value to his district’s lodges. Finally, it gives the brethren of the district time to get to know the eventual DDGM. Only incredibly active masons in the district know next year’s DDGM if the pick is from outside of their own lodge. A three year commitment would allow the eventual DDGM to get to know the brethren of the district and vice versa.

This structural change would ensure that we are driving toward better education and membership services and remove the ceremonial nature of the DDGM office. I believe that this would result in better prepared masonic leaders.

Is lodge x better than lodge y? Maybe, but how would we prove it? We use the Hillman award and the District Deputy’s Official Visit Checklist to evaluate lodge health, but the data collected in these forums never gets collected and aggregated to glean insight. Maybe someone in Richmond does all sorts of analysis that us normal masons don’t get to see, but I doubt it. I recommend the Grand Lodge come up with a set of simple metrics that are used to measure lodge health and publish the rankings at Grand Annual Communications.

I believe that three metrics should be steadfast year to year, and two metrics should be introduced by the new Grand Master based on his priorities. The three core metrics should be yearly membership increase, dollar per member, and how many of the three lectures can be given by a lodge member. This would enable masonic leadership to be able to measure membership health, financial health, and ritual health.

Ignoring the two Grand Master measures, suppose we have this data:

To weigh each measure equally, we must normalize the data by doing a simple calculation where Zi=(Xi-min(X)) / (max(X)-min(X))

We are now able to see that Lodge A is the healthiest of the three lodges and that Lodge B is struggling in comparison to the other two. What an easy, insightful approach that requires only  four data points. This approach could easily expand if the Grand Master wanted to add his own measures.

OK, now that we have this data, what do we do about it? I think individual lodges deserve to know how well they are performing in relation to their neighbors. Publishing the list allows for public praise…..and public admonishment. Who in the world wants to be the Master of a lodge that is at the bottom of the list? And if you were, wouldn’t you do everything in your power to get out of the basement? This data would also allow the Grand Lodge to put resources toward getting those lodges off the bottom of the list through various means like sending Grand Lodge Membership Committee Members to those lodges for improvement seminars or asking accomplished masons in the area to start helping build the lodge back up.

Going back to The Wire, one of the things that is shown is that all institutions “juke the stats” so we need to be vigilant about unintended consequences of using metrics to assess performance. Though they can be misleading, “stats” are imperative to continuous improvement and diagnosing institutional problems. We must implement some tracking mechanism to diagnose and measure our progress , because without measures we will never know if we are getting better or worse. The simple measures I highlighted above should be used as building blocks by the Grand Lodge to assess lodge health, learn from high performing lodges, and assist struggling lodges to rebound.

I’ll conclude by saying that I believe Masonry is still a relevant institution that has a critical role to play in our community. With slight tweaks like the ones I presented above to our historic craft, I believe we could reverse the negative trends I highlighted.

But as I learned from The Wire, if institutions do not ask tough questions and refuse to take bold action in order to live up to their founding principles, they tend to sink into mediocrity, or worse

At the time of writing, David Bella serves as the Senior Warden of Alexandria-Washington Lodge No. 22 where he is a Life Member in Perpetuity. He is involved in various local appendant bodies and takes great pride in being a member of the Alexandria community. The views outlined in this article are those of the author and do not represent those of Alexandria-Washington Lodge No. 22 or the Most Worshipful Grand Lodge,  A.F. &A.M. of the Commonwealth of Virginia.