Alexandria, VA – AW22 launches a full schedule of events in support of the George Washington Masonic National Memorial as it celebrates this once in a generation masonic event. Visit our event page for information on how to register for these events. 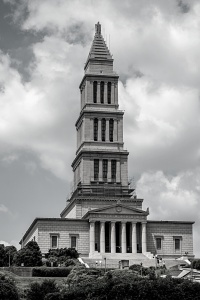 In 1893, Alexandria – Washington Lodge, No. 22, having faced two devastating fires, began discussions to build a fireproof lodge hall to protect the items of Illustrious Brother George Washington’s with which it had been entrusted. That same year, at the Chicago Columbian Exposition, 33 Grand Lodges hosted a Masonic Congress that would evolve into the Conference of Grand Masters. Three decades later, these fraternal thoughts converged in the laying of a cornerstone; a jewel of the Golden Age of Masonic Architecture; a beacon of Masonic Light extolling the life and legacy of our world renown brother.

February 22, 1910, the committee formulating the George Washington Masonic National Memorial Association wrote, “Whereas, it has been aptly said that ‘Until time shall be no more, will be a test of progress, which our race has made in wisdom and virtue, be deprived from the veneration paid to the immortal name of Washington,’ now therefore be it, resolved, first that we approve and endorse the proposed erection of a Mason Temple as a memorial to George Washington under the auspices of Alexandria – Washington Lodge, No. 22 AF&AM of Alexandria, Virginia.

“That we pledge our earnest support to this commendable undertaking and that all Grand Masters are earnestly requested to call the same to the attention of the lodges within their several jurisdictions, and urge them hearty cooperation and assistance.”

Twelve years would pass after the adoption of that resolution, but not even World War could prevent the Masons of North America from raising funds to erect a temple to Washington’s memory. Ground was broken in 1922 and the cornerstone laying ceremony in 1923 included all ranks of society—the President of the United States, the Supreme Court, celebrities and dignitaries from across the hemisphere, and most importantly, thousands of Freemasons, dedicate to this worthy cause.